Posted by awin wijaya Posted on 1:20 AM with 4 comments 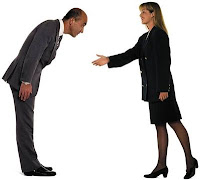 As it has been discussed in the previous article: means of communication, that as a means of communication, related to discourse study, language has two primary functions, those are, transactional and interactional function. In a simple definition, the first term refers to language as a means of conveyance of information, while the second refers to language that functions as a means of social relation maintenance. In line with the second function of language,  interactional function, people have to see to whom they are speaking, because it may be some expressions are considered rude. It is needed to identify the social values of a society in order to speak politely. Making decisions about what is not regarded as polite expressions in any community will involve assessing social relationship along the dimensions of social distance or solidarity, and relative power or status. Being polite may also involve the dimension of formality.

The study of politeness strategy is basically the study of knowing the way the people use the language while they are having interaction or communication. It preaches how to use the language and conduct the conversation run well and go smoothly.
In case of communication, however, everyone wants to be understood and not to be disturbed by others; moreover, he or she does not want to loose his face while communicating. Loosing face means the notions of being embarrassed, humiliated or disappointed. That is why face is something that is emotionally invested, maintained, enhanced and constantly attended in an interaction.


Concept of face
Face means respect, self-esteem, self-image in the community, Brown and Levinson say that society is governed by two desires: to be free from imposition, and to be appreciated and approved of. First desire considered a negative politeness, and the latter is considered a positive politeness.
Face is the central idea of ​​this theory:


Face-Threatening Act (FTA)
Meanwhile, in a conversation, the interlocutor could be a threat to someone's face and the face of his own by making a question, suggestion, criticism, reveling mistake, thanking, and so on. All of these are so-called face-threatening act (FTA). Most of the speech acts of speaker emerged potentially results FTA.

• The positive politeness strategy shows you recognize that your hearer has a desire to be respected. It also confirms that the relationship is friendly and expresses group reciprocity. (Wish yourself image is accepted and appreciated)

e.g. we both know that (seek agreement) everything will be alright from now on.

Brown and Levinson propose fifteen positive and 10 negative politeness strategies in which for further explanation will be discussed in "Positive Politeness Vs. Negative Politeness Strategies".

• Off-record indirect strategies the main purpose is to take some of the pressure off of you. You are trying to avoid the direct Face Threatening Act of asking something. (Do indirect FTA-satire / questions)

Used to tell someone standing / sitting near the window to open it.
Share this article :
Labels: linguistics, Politeness Strategies, pragmatics