Posted by awin wijaya Posted on 10:10 PM with No comments 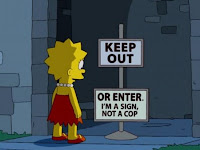 Yule (1996: 53-54) states that one general classification system lists five types of general functions performed by speech acts, those are:

1. Directives
A directive speech act is an attempt by speaker to get hearer to do something. Example of directives are ordering, commanding, requesting, pleading, begging, entreating, daring, suggesting, inviting, questioning, insisting and permitting. Note that the action must be future and voluntary, because it is impossible to ask someone to perform an action in the past or to do something which is not a matter of human will. e.g. ;
• Give me your hand, please!
• Could you lend me a book, please!
The expressed psychological state is that speaker wants hearer to do something. The direction of fit is world-to-word, for speaker (S) is attempting to get the world resemble his or her words.

2. Commisives
In a commisives speech act, speaker commits himself or herself to the performance of an action. Examples of commisives are promising, pledging, threatening, guaranteeing, agreeing, consenting and refusing. Again, the promised action must be future and voluntary. The examples are;
• I’ll accompany you going to the market tomorrow
• If you disobey the rule, I will give you a punishment.
The expressed psychological state is that speaker intends to do something. The direction of fit is world-to-word.

3. Representatives (also known as “Assertives”)
In this type of speech act, speaker represents a state of affairs. Examples of representatives are affirming, declaring, describing, claiming, stating, explaining, classifying, insisting, emphasizing, and predicting.  representative commits speaker to the truth of the preposition. The expressed psychological state is one of belief. The direction of fit is wordto- world. The examples are:
• Dad : he is my son
• I tell you that Jakarta is the capital city of Indonesia

4. Expressives
In an expressive speech act, speaker expresses a psychological state about the situation or state of affairs denoted by the preposition. Examples of expressives are thanking, apologizing, consoling, congratulating, greeting, deploring, and welcoming. The propositional content is something which affects speaker or hearer. In using expressive, the speaker makes words fit the world (feeling). e.g.
• I’m really sorry!
• Congratulation for your success
• Thank you for being helped, Nick!