Cooperative Principle: The Concept of Implicature

Posted by awin wijaya Posted on 2:18 PM with 3 comments 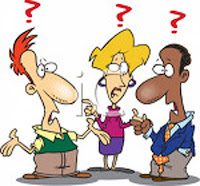 The concept of implicature was first introduced by Grice (1975) as the answer to the meaning concern which is unable to be covered by the ordinary semantics. It is insufficient to use semantics to uncover the meaning of utterances. The inappropriateness of understanding of meaning of utterances much influences the achievement of the communication purpose. The purpose of communication is in order the massage the speaker wants to convey is accepted appropriately by the hearer. To understand precisely what is meant by the speaker in uttering the utterances in a conversation, it is very important to understand the concept of implicature.

In conversation, the utterances produced by either the speaker or hearer has explicit and implicit meaning. Explicit meaning can be understood both by predicting the semantic meaning of the words within the conversation and by understanding the syntactic structure of the language used in the conversation. In the other hand, to understand the implicit meaning in a conversation, the rules of semantics and syntactic of the language is insufficient. Therefore, the concept of implicature was introduced. According to Brown and Yule (1983) implicature is used to calculate what is suggested and meant by the speaker as a different thing from what he actually said explicitly.

A: Has John arrived?
B: There is a red car in the garage.