Cooperative Principles: The Hedging of Maxims

Posted by awin wijaya Posted on 2:15 PM with No comments 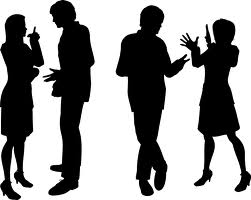 Hedging is any deliberately ambiguous statement or any equivocal statement. Grundy (2000) includes hedging among other mitigating devices in his politeness marker category ‘downgraders’. He calls there devices, hedges, play-downs, understaters, downtoner, or ‘minus’ comminters.

The hedges and intensifiers are more comment on the extent to which the speakers abiding by the maxims which guide our conversational contributions than a part of what is said or conveyed. It seems that when we talk, we not only convey messages, but also frequently like to tell each other how informative, well founded, relevant, and perspicuous these messages are. Speakers frequently use highly grammaticalized hedges and intensifiers to inform their addressees of the extent to which they are abiding by the maxims. These hedges and intensifiers show that the guiding principles for talk suggested by Grice really do exist and that speakers orient reflexively to these principles as they communicate.

Levinson (1985) states that the theory of conversational implicature is a theory of language in which language is viewed as a self-contained system of rules. He further argues that there are interesting relations between structure and function of the language. Thus, the English particles such as ‘well’, ‘oh’, ‘ah’ ‘so’, ‘anyway’, ‘actually’, ‘still’, ‘after all’, are the lexical items which at time refer to the notion of conversational implicature and are being described as “maxim hedges” indication how an utterance is preface in order o make up to cooperative expectation.

Moreover, in academic speech, hedging is most appropriately described as either (a) a lack of competence commitment to the truth value of an accompanying proposition, or (b) a desire not to express that commitment categorically.

Myers (1989) groups all linguistic devices under his categories of "negative politeness and hedging, focusing less on the description of the linguistic devices themselves than on their purpose or motivation. Further, hedging is a politeness strategy when it marks a claim or any other statement as being provisional, pending acceptance in the literature, acceptance by the community-in other words, acceptance by the listeners.  He goes to point out that hedging can be realized in any different linguistics forms, and gives examples of the use of condition statements, modifiers, verb choice, framing statement that indicates the weight a statement should have or the degree of doubt involved, and even statements of personal opinion.

Quality Hedges
Brown and Levinson (1990) state that quality hedges may suggest that the speaker is not taking full responsibilities for the truth of his utterances. For instance:
think…
I         believe…
assume…

Or alternatively they may stress S’s commitment to the truth of his utterances; in other words, they reflect the commitment of the writer to the quality of the proposition contained in the subsequent part of the statements and do not contribute truth value to the statements as a whole. Such as, I absolutely (deny/ promise/believe) that…, others take the opposite view and say…, The issue says…, It is quite right what people say…, Some people believe that…, So you can imagine even…, In this case..., etc. Or they may disclaim the assumption that the point of S’s assertion is to inform H, such as, As you know…, As it well known…, As you and I both know…, etc.

Quantity Hedges
Quantity hedges, we find archetypal examples in these English expressions, which give notice that not as much or not as precise information is provided as might be expected, such as: roughly, more or less, approximately, give or take a few, or so, I should think, I can’t tell you more than that it’s…, to some extent, all in all, in short, basically, so to speak, etc. the assertion of personal opinion show that the information tried to be conveyed is limited.

Relevance Hedges
In Relevance hedges, we note that because of sensitivity of topic changes as impositions on H’s face, such changes are often done off record. Hedges that mark the change, and perhaps partially apologize for it, include, by the way…, oh I know…, anyway…, this may not be relevant/ appropriate/ timely but…, I might mention at this point…, while I remember…, etc.

Manner Hedges
Finally, some common Manner hedges includes, what I meant was…, more clearly…, to put it more simply…, you see, yeah?, got it?, OK?, is that clear?, see?, etc.