How to Draw Tree Diagram

Posted by awin wijaya Posted on 1:08 AM with 2 comments
A tree diagram shows the hierarchical structure of the sentence. The sentence is considered the basic of the syntactic system. Instead of beginning with actual sentences, however we begin with the directions for generating or producing structural descriptions of sentences, which are set forth in phrase structure rules. The rules should be interpreted as an instruction to rewrite or expand the symbol on the left of the arrows as the sequence on the right. In S NP + VP, “S” stands for sentence, “NP” (Noun Phrase) and “VP” (Verb Phrase). The item on the left dominates the elements on the right. Bornstein starts with S, the highest level and works down to lower level until it comes to maximally specific level where in addition symbol can be written. This process is called derivational in the sentence. 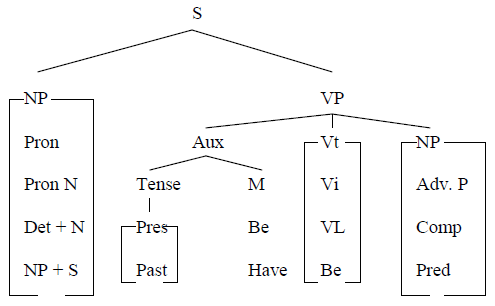 Tree diagram provides a precise means of defining syntactic relation. NP is immediately dominated by an S in the subject of that sentence. An NP is immediately dominated by a VP is the object or complement of the sentence containing the verb phrase. Tree diagram also shows which words are constituents of a sentence (Bornstein, 1997: 44). From the diagram below we can see that Aux, Vt and NP belong to the VP.

Points of juncture in tree diagram are called nodes. If one node is immediately dominated by another, it is called a daughter node. If one node is immediately dominated by the same nodes, they are called sister nodes. In the following diagram, the nodes NP and VP are daughter of S and sister nodes of each other. NP is the left sister whereas VP is the right sister.