Posted by awin wijaya Posted on 11:10 PM with 3 comments
Akmajian and Henry (1975: 236-237)  state that “Transformation means preserving of two surface structures derive from exactly the same underlying structure and if their derivations differ only in that an optional transformation has applied in one but not the other, than they must have the same meaning”.

Elgin (1973:294), in her study believes that linguist is constructing grammar to identify the meaning of surface structure from the deep structure. Every human being who is native speaker of a language is walking around with just such a grammar in his head. There are no linguists have yet succeeded in achieving the same perfection and completeness but that is the goal toward their work. (Elgin, 1973: 54)  states that “When a deep structure undergoes a rule (or rules) and the end result is a sequence that can be spoken, the rule has transformed the sequence causes no transformational rule can ever be allowed to change meaning” 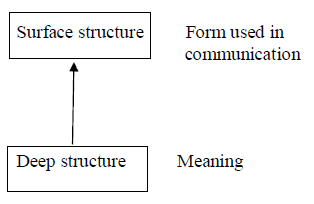 
(Jacobs and Rosenbaum 1968:18) states, “The operation is called elementary transformation. The elementary consists of adjunction, substitution, and deletion”

Adjunction
Adjunction is a process by which one constituent is attached to another to form a larger constituent of the same type. For example; we could say that in a sentence like “He shouldn’t go”, the particle “not” can be adjoined to the auxiliary should to form the negative auxiliary “shouldn’t”.

Deletion
There are five kinds of deletion, those are:

c. Linking Verb Deletion
In the linking verb deletion, the constituent that experiences a deletion is a verbal “be”. Linking verb occurs together with the noun phrase deletion. Linking verb deletion can be considered as tobe Deletion. “Be” deletion transformation happens in the present tense sentence. For example:
“wearing makeUp”…………”
three Woman are Wearing MakeUp” 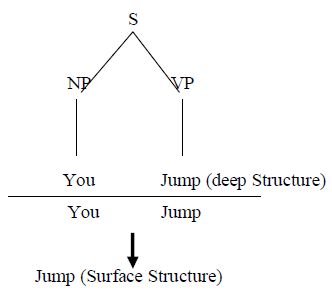 e. Deletion under identity
For example, Ellsberg was arrested by FBI and Fonda was too. These sentences seem to consist of a complete sentence, followed by the conjunction and, followed by what we can call elliptical sentence. Taken out context, these are meaningless and could not standalone. Yet, when conjoined will dull sentence used in ordinary speech. The meaning of each of the elliptical sentences is dependent on the meaning of the sentence that precedes it. Thus, Fonda was too is taken to mean that Fonda was arrested by FBI too. We should note that sentences such as those present our theory with several nontrivial problems. We have no way of generating elliptical sentences such as those just stated. Our phrase structure rule for sentences, for example: NPAuxVP, always generates structures that are “complete” and there is no way we can generate a “partial” structure such as Fonda was. Second, we have seen that the elliptical sentences are followed by
word “and”. Thus, we may choose to generate elliptical clauses, we must ensure that our theory reflects the facts that they are dependent on the preceding sentence, at least for their meaning.