What Is Transformational Grammar?

Posted by awin wijaya Posted on 12:53 AM with No comments
According to Webster’s New World College Dictionary (1996: 1420), transformational grammar generates the deep structures of a language and converts this to the surface structures by means of transformation. Goodman (1970: 299) stated that all kinds of English sentences can be analyzed by using structure rule. He said that a sentence consists of phrase structure, noun phrase (NP), verb phrase (VP), adjective phrase (Adj. P), prepositional phrase (PP), auxiliary (Aux), and others.

Bornstein (1977: 39-99) says that “Transformations bring about various kinds of changes; they can rearrange elements in a string of symbols, add elements that were not there before, delete elements, and substitute one element for another.” He also said that in Transformational Grammar (TG) phrase structure is illustrated by means of tree diagrams called phrasemakers, which show the hierarchical structure of sentence. Bornstein symbolizes some of the common symbols used in Phrase Structure Rule as follows: 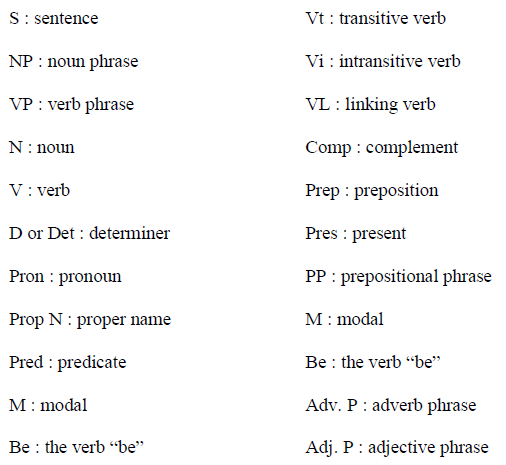 In Transformational Grammar, Phrase Structure Rules are illustrated by means of tree diagram called “phrase makers” that show the hierarchical structure of the sentence. We begin S, the highest level, and work down to the lower levels until we come to maximally specific of terminal level where no additional symbols can be written. This process is called a derivation of sentence. This steps of derivation of a sentence is: 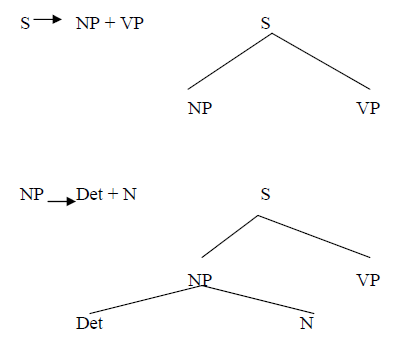 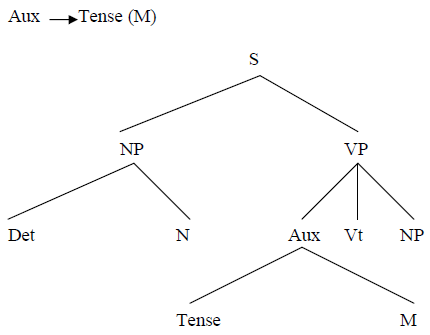