Posted by awin wijaya Posted on 12:16 AM with 1 comment
Aksara Murda

Aksara Murda is used to start a word which expresses proper name, such as name of person, city, place etc. Its function is just the same as capital letter in Latin alphabet, but the different is it is in the form of letter-syllable and only has limited number of letter-syllable, eight letter-syllables exactly: Na Ka Ta Sa Pa Nya Ga Ba as displayed in the above table.

Note: Aksara Murda is used to represent the italic letters. 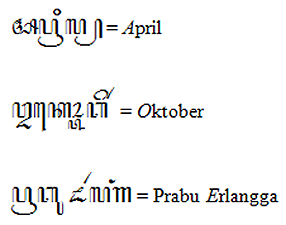 Note: Aksara Swara is used to represent the italic letters.

Along with the settlement of Moslem traders from Gujarat to Javanese Island who has Arabic as their native language, the Javanese Alphabet system committed modifications. In the Arabic, there are many sounds that are alien in Javanese ears, such as kha, fa, dza, gha, and za. To adapt this sound Javanese people also made modification in their alphabet letter system; this modification is known as Aksara Rekan, as it is displayed in the above table. The example of the usage is as follows:

Here is the form of numbers in Javanese alphabet system. The use is just the same as numbers in Latin alphabet, but with colon in its group of number to separate it from letters. Such as: