Posted by awin wijaya Posted on 12:53 AM with No comments 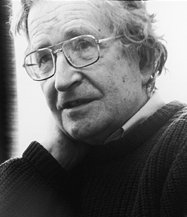 A:      'generative'- to generate = (1) to produce, (2) to specify the rules
(1)  owing to our mental grammar, when we speak / write we produce new grammatical sentences.
(2)  Generative Grammar describes our mental grammar by specifying the rules / making the hidden linguistic rules in our head explicit. It has two ways:
(a) by drawing a tree structure (Tree diagrams);
(b) by stating the Phrase Structure (PS) Rules in the form of “re-write” rules: X à X  Z
(e.g., S à NP  VP)

Three important linguistic principles
Q:      What makes us able to distinguish between grammatical and ungrammatical sentences?


A:      The “mental grammar” or the “linguistic competence” in our mind does.
The first principle proposed by Chomsky is (1) Language is a mental fact.


How many sentences do you think you can arrange from these words?


Q:        Can language imitated and produced by parrot be called a language?


Q:        Can you produce an English sentence/ utterance that never be used by any other human in this surface of the earth?
A:        (3) Language is creative.  “linguistic creativity” = crossing the borders / limits of linguistic rules,e.g., That’s very you; kopi banget; benci à membencikan; to slipper the cockroach; Is this a knock-knock bird?

This can be explained in two different ways.  First, as noted above, “linguistic
creativity” means crossing the borders/limits of the existing linguistic rules.  In
addition to the examples given above, some poets are fond of “violating” linguistic
rules, since they are entitled to “poetic license” = lisensia puitika
Anyone lived in a pretty how town
With up so floating many bells down
Spring summer autumn winter
He sang his didn’t, he danced his did.
(E. E. Cummings)


Secondly, “creativity” refers to our every use of our language.  Every time we speak / write, we “create” new utterances/sentences.