Posted by awin wijaya Posted on 12:50 AM with No comments 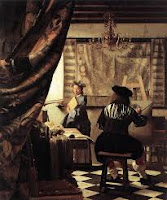 Allegory which comes from Greek, allos means other and agoreuein that means to speak in public, is figurative mode of representation conveying a meaning other than literal meaning. Allegory is one of ways that the writer may use to express what he or she actually wants to convey through his or her literary work. This kind of literary work that is written in the form of allegory, the writer usually wants to convey indirectly what he or she usually means, a writer camouflage what he or she actually wants to express that the literary work cannot be understood by reading its surface language but it must be deeper meaning below the surface. That is why allegory is often defined as a story or visual image with a second distinct meaning partially hidden behind its literal or visible meaning. An allegory is a work which has meaning behind the surface meaning”. In other word with the same point, allegory as a literary statement presenting its meaning in a veiled way; the literal meaning is a metaphor for the real meaning. It means that allegory, in short, is simply one thing consistently being presented in the guise of something else.

An allegory is a narrative in which the agents and action, and sometimes the setting as well, are contrived both to make coherent sense on “literal” or primary level of signification, and also to signify a second, correlated order of agents, concepts, and events. Allegory is also a narrative that serves as an extended metaphor. It may be written in the form of fables, parables, poems, stories, and almost any other style or genre. The main purpose of an allegory is to tell a story that has characters, a setting, as well as other types of symbols that have both literal and figurative meanings. But, allegory differs from symbolism. The difference between an allegory and a symbol is that an allegory is a complete narrative that conveys abstract ideas to get a point across, while a symbol is a representation of an idea or concept that is able to have a different meaning throughout a literary work. Furthermore, although both of them have the meaning behind the surface meaning, but in symbolism is exclusive and cannot be translated into other word. In allegory is otherwise that we can state confidently what the precise meaning is that lies behind the surface, because we are meant to see through the text to its underlying significance.

Allegory, in literature, is symbolic story that serves as a disguised representation for meanings other than those indicated on the surface. In addition, allegory in literature is the representation of a subject under the guise of another suggestively similar. In written narrative, allegory involves a continuous parallel between two or more levels of meaning in a story, so that its persons and events correspond to their equivalents in a system of ideas or a chain of events external to the tale. In the other word, the characters in an allegory often have no individual personality, but are embodiment of moral qualities and other abstractions. For example, Bunyan’s Pilgrims Progress (1678) is more than just an account of the hero’s adventure; because of his name, Christian, and because of the nature of his experience, it is recognized that the text as having a more general significance as an allegory of Christian’s journey through life. That is why allegory is generally treated as a figure of rhetoric, but an allegory does not have to be expressed in language. Medieval thinking accepted allegory as having a reality underlying any rhetorical or fictional uses. The allegory was as true as superficial facts of surface appearances.(*_*)