Posted by awin wijaya Posted on 11:12 PM with No comments 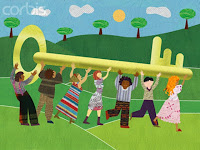 2. Accommodation Theory
Accommodation theory is derived from the research of Giles and associates into inter-group uses in multilingual communities such as Britain. His primary concern is to investigate how inter-group uses language reflect basic social  and psychological attitudes in inter ethnic communication.

Accommodation theory shares certain premises with the Acculturation Model, but it also differs from it in a number for significant ways. Giles considers he level of motivation to be reflect of how individual learners define themselves in ethnic terms. This in turn, is governed by a number of key variables.

1. Identification of the individual learner with his ethnic in-group.
2. Inter-ethnic comparison:  whether the learner makes favorable or unfavorable
comparisons between his own in group and the out group.
3. Perception of ethnology-linguistic vitality:
Whether the learner asses his group as holding a low or high status and as sharing or
excluded from institutional power
4. Perception of in-groups boundaries:
5. Identification with other in-group social categories.
In addition to determining the overall level proficiency achieved in SLA, Accommodation
Theory also accounts for the learner’s variable linguistic output.

Evaluation
The strength of Accommodation theory is that encompass language acquisition and language use within a single frame work. And Accommodation Theory provides an explanation of language-learner language variability.

3. Discourse Theory
It follows from a theory of language use, in which communication is treated as the matrix of linguistic knowledge, that language development should be considered in terms of how the learner discovers the meaning potential  of language by participating in communication.

The Discourse Theory, Hatch (1978c; 1978d)  has  proposed 4 principles:
1. SLA follows a ‘natural route in syntactical development.
2. Native speakers adjust their speech in order to negotiate meaning with non native
speaker.
3. The conventional strategies used to negotiate meaning.
4. Thus, the ‘natural’  route is the result of learning how to hold conversation.