Posted by awin wijaya Posted on 11:49 AM with 2 comments 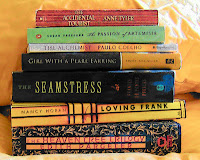 There are six kinds of novel. They are: adventure, psychological, detective, sociological, political, and collective novels.

1 Adventure novel
An adventure novel tells about an exiting and dangerous journey. And also, it talks about experiences and is full with many events. In adventure novels, the most dominant role is man because the content of this story involves man’s problems. If women are mentioned in this novel, they are only minor characters in the story.

3 Detective novel
This novel tells about mysteries, secrets, and crimes. The author always tries to create a good technique by raising suspense to guess the follow up of the story in order that the readers are more interested to read it.

6 Collective novel
This novel focuses on social problems. In this novel, there is a mix between anthropology and sociology.
The novel investigated in this study belongs to the adventure novel because it tells about exciting and dangerous journeys which are full with conflicts. Besides, the most dominant role is a man and women are only minor characters in the story.
Share this article :
Labels: literature, prose